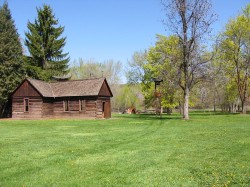 The Ahtanum Mission is currently closed for the remainder of the year.

The Gospel was brought to the Yakama in 1847 by Fathers Charles Pandosy, Casimir Chirouse, George Blancehett and Father Richard at the request of Chief Owhi. The St. Joseph Mission at the Ahtanum was not established until 1852, but this Mission is on the lands of Chief Kamiakin who asked the priests to come to this group of Yakama. These French priests, Oblates of Mary Immaculate, were some of the first non-Indians to reside in the Yakima Valley. The little Mission, fifth of five Missions established by the Oblates, was the first church in the Ahtanum area. Originally 677 acres, the Mission site fronted a small creek and was where most of the agricultural activities were established and maintained. From the Oblates the Indians learned the art of making the soil produce much of the necessities for human consumption.  The priests remained at the Mission, teaching and baptizing, until November 1855 when the local Indian wars took their toll on the Mission. Following the battle at Union Gap, the U.S. Army moved on to the Ahtanum were idle Army volunteers found the Mission temporarily unattended. While some of the soldiers dug for cabbages and potatoes in the Mission garden, they found a half keg of gun powder buried by one of the priests. A wild cry arose that Father Pandosy was furnishing powder to the Indians. Soldiers set fire to the Mission buildings, which burned to the ground before the officers in camp became aware of the plunder. Later the U.S. government cleared Pandosy and sent a formal apology.  The Mission site was abandoned until September 1867 when Father L. N. St. Onge, with the help of lay missionary J. B. Boulet, built the hand-hewed log church and rectory that remain standing today. They planted the first orchard in the Yakima Valley on the Mission grounds with cuttings they brought from a farm in The Dalles, Oregon. Some of the old apple trees still produce bountiful fruit at the Mission site today.  In October 1870 Father Joseph Caruanna, S.J. joined the Oblates in residence at the Mission. The Mission church was dedicated on July 15, 1871, after which Father St. Onge formally turned the Mission over to Father Caruana and the Society of Jesus at the request of Bishop Augustine Blanchet of the Diocese of Nesqually. Father Caruana was the superior of a Jesuit novitiate at the Mission. The Jesuits grew wheat and vegetables and raised cattle, pigs, and horses at this completely self-sufficient Mission.  Despite the fact that the predominantly Catholic Yakamas controlled Central Washington, a new U.S. government policy under President Ulysses Grant gave the Yakama Reservation to exclusive Methodist domain. This so-called Grant’s Peace Policy” prohibited priests from stepping foot onto reservation land. Nevertheless, the seeds of Catholic faith sown at Saint Joseph Mission would yield a great harvest in the subsequent evangelization of Central Washington.

Held the first Sunday of Each Month (April -Nov) Mass begins at 9:30 a.m and will be outdoors.