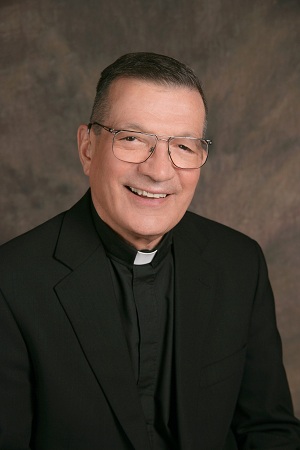 Most Rev. Carlos Arthur Sevilla, S.J. is the Bishop Emeritus of the Diocese of Yakima, Washington.

Bishop Sevilla was ordained to the priesthood on June 3, 1966.  He furthered his studies at the Jesuitenkolleg in Innsbruck, Austria and the Catholic Institute of Paris, France.  He made his solemn profession as a Jesuit on April 22, 1974.

On December 6, 1988, Bishop Sevilla was appointed an Auxiliary Bishop of San Francisco, California by Pope John Paul II. He was ordained a bishop on January 25, 1989, in San Francisco by the late Archbishop John R. Quinn.

On December 31, 1996, Bishop Sevilla was named the sixth bishop of Yakima.  In August 2010, he reached the age of 75 and submitted, as church law requires, his letter of resignation to Pope Benedict XVI.

On May 31, 2011, when the seventh bishop of Yakima was installed, Bishop Sevilla became Bishop Emeritus of the Diocese of Yakima.  After consultation with the Jesuit Order, he continued to live in Yakima, helping his successor in the ministries of the diocese and active in ministries outside the diocese as well. In July 2016 he moved to the Jesuit community at Bellarmine Prep in San Jose, CA. In July 2021, Bishop Sevilla moved to Sacred Heart Jesuit Center in Los Gatos, CA. In both of those locations he continued and continues to be active as a spiritual director and giver of retreats and conferences wherever he is invited to undertake those ministries while also helping with weekend Masses in local parishes.

Within the United States Conference of Catholic Bishops, Bishop Sevilla is a member of the Sub-Committee for Worship in Spanish, and a consultant for the Committee of Hispanic Affairs.