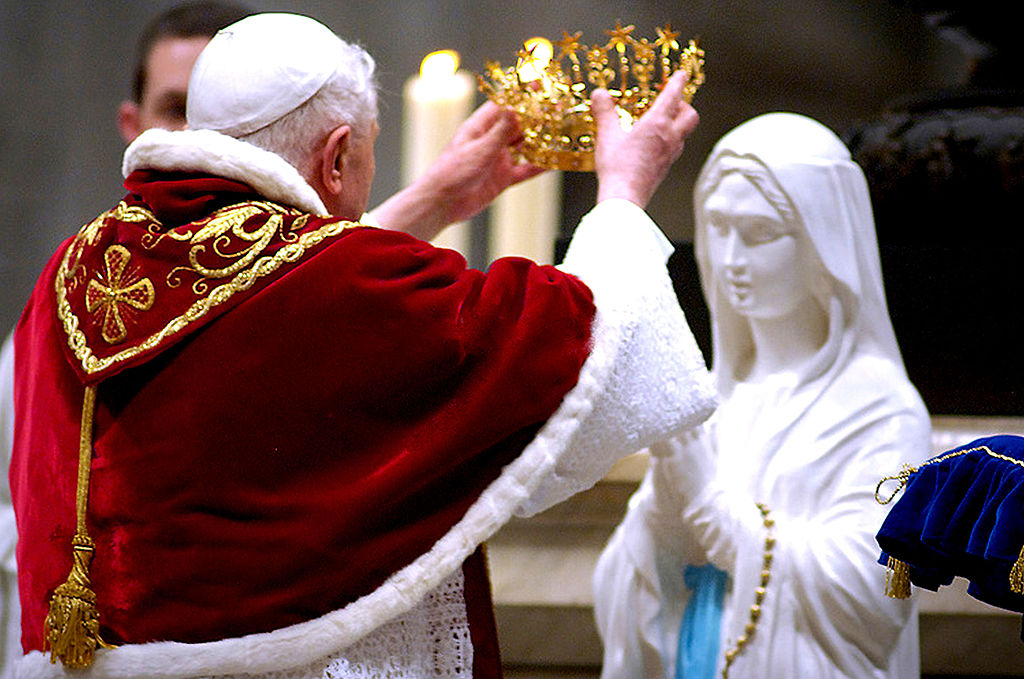 Remembering Pope Benedict on the Vigil of the Solemnity of Mary, Holy Mother of God Peace be with you! How appropriate to remember our emeritus Holy Father, Pope Benedict the Sixteenth on this Solemnity of Mary, Holy Mother of God.

Pope Benedict the Sixteenth was born in Bavaria in the town Marktl am Inn.  Not too far away is the most visited Marian shrine in Germany: Our Lady of Altötting. Like the Basilica in honor of Our Lady of Guadalupe in Mexico City, the church that houses the image of Our Lady of Altötting holds thousands of small plaques. They depict images of a miracle granted or a spiritual favor received. How appropriate that Pope Benedict, who was born on Holy Saturday as the holy women of scripture peer into the empty tomb, would die as we contemplate Mary as Holy Mother of God.

Imitating Mary, Pope Benedict XVI prayed and pondered. Gratefully his voluminous teaching, preaching and writing gives us a glimpse of his Marian-infused spirituality. His famous “Introduction to Christianity” is a book I am rereading. A hard copy is on my reading table, and I have a copy loaded onto my Kindle.

I cannot possibly do justice in a brief homily to the richness of his thought. But when speaking of Christianity there is one turn of phrase I would most like to highlight: “Creative Minority.” Going back to some of his earliest lectures as a young priest, Benedict suggested that the future of Christianity may not be in great numbers. He suggested that the Catholic Church may not always hold a leading role in the wider world either. He suggested, however, that the future of the Christian may be in becoming a creative minority. During his first World Youth Day in Cologne in 2005 he suggests that we be communities of salt and light, seasoning the world with the love of Jesus Christ.

Mexico is the largest Catholic country in the world. Large liturgies and outdoor processions shape the social culture of Mexico despite the secular nature of the Mexican revolution. In so many ways, Catholicism swims with the culture. Large, beautiful Churches grace even the smallest of towns.

In Spanish, I sometimes need to explain that it is just the opposite here. Christianity does not necessarily swim along the currents of the culture. When it does, the predominant religious culture is Protestant. The universality of a global Catholic Church is replaced by a kind of Christian nationalism dominated today by free-standing evangelical Christian congregations not necessarily even connected to each other by a common creed. Each with their own interpretation of biblical texts.

Considering our current Holy Father Pope Francis and his emphasis on become a more missionary Church, Pope Benedict’s phrase “creative minority” might be especially noteworthy. Our Catholics of Mexican heritage certainly are the majority in the Diocese of Yakima. But they are a creative minority in the wider culture. Our English-speaking parishioners have long been the creative minority for friends and neighbors across Central Washington.

It seems to me our Catholic Charities agencies, our efforts to protect the unborn by walking with their moms through PREPARES, the friendships fostered by our Knights of Columbus, the legacy of women religious such as the Sisters of Providence, the Sisters of St. Dominic and the Sisters of the Holy Names of Jesus and Mary are all “creative minorities” that have built the foundations of faith for newer generations of Catholics.

The religious fervor of our Spanish speaking communities with rosaries, prayer groups and, again this next year, the Congreso de Evangelización Familiar serve as “creative minorities,” seasoning the faith of the entire Church in Central Washington. The processions through downtown Yakima on Corpus Christi and Our Lady of Guadalupe make us a “creative minority” filled with dancing, music, food, piñatas that point to the joy of faith-filled family life.

When he served as Holy Father, Pope Benedict led the Church through the difficult complexities of the sexual abuse scandal. He stood at the center of profound debates about the role of faith in a secular culture. We still face these same challenges today. But I am not convinced that great shifts in attitude can take place solely through public policy, or better Church governance. These presuppose a deep conversion of heart. They hinge of becoming a “creative minority” for those around us sharing the “Joy of the Gospel” that comes from Jesus Christ.

On this Solemnity of Mary, Holy Mother of God, let us entrust our Holy Father emeritus, Pope Benedict XXI to her care. May we give thanks to God for the gift of his ministry. Through our prayers may we usher him ever closer to God and ever closer to the bosom of the Blessed Virgin Mary.  Peace be with you!