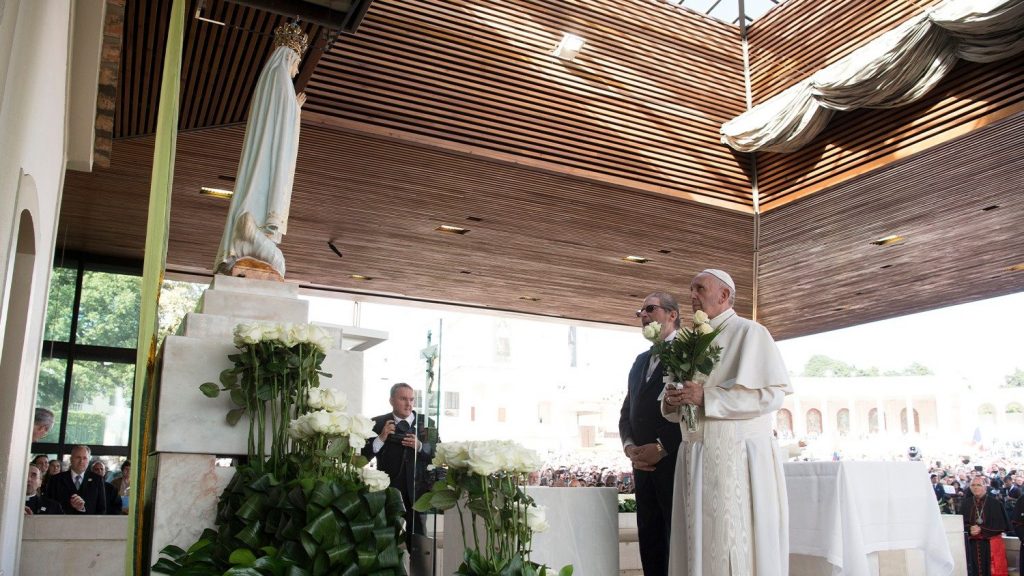 In today’s Act of Consecration of the world, especially Russia and Ukraine, to the Immaculate Heart of Mary, Pope Francis uses much beautiful imagery of the Blessed Mother, some of which may be unfamiliar to Catholics. The Vatican News recently provided some helpful background.

A prayer from the heart of the great Marian tradition

Ahead of the March 25 Consecration of Russia and Ukraine to the Immaculate Heart of Mary, the Vatican has released the text of the Act of Consecration, which Pope Francis will pray together with the People of God, led by the bishops and priests of the whole world.
By Andrea Tornielli

A public, choral prayer, uniting the entire Church, to implore peace and consecrate the whole of humanity, and in a special way Russia and Ukraine, to the Immaculate Heart of Mary, will take place while the fighting and bombings that claim victims among Ukrainian civilians are still raging. A simple, humble gesture of those who believe and trust in the power of prayer rather than the power of weapons. The text of the Act of Consecration and Entrustment that Pope Francis will pray has now been released.

The consecration will take place at around 6:30 PM Rome time, on Friday, 25 March, the Feast of the Annunciation, at the end of the Penitential Celebration in St. Peter’s Basilica. The text, interwoven with quotations from the great Marian tradition, will be pronounced throughout the world by the people of God, led by their bishops and priests. Here are some of the references contained in the prayer:

Mother of God is the title by which Our Lady is venerated in the East and in the West, proclaimed as a dogma by the Council of Ephesus. Mother of Mercy is an expression that also recurs in the prayer “Salve Regina.”

He has given you to us and made your Immaculate Heart a refuge for the Church and for all humanity. These words evoke the message of Fatima: “God has decided to establish devotion to my Immaculate Heart…” and “my Immaculate Heart will be your refuge.” Although the dogma of Mary’s Immaculate Conception, proclaimed by Blessed Pius IX in 1854, pertains to the Catholic Church, the Orthodox Churches share the same faith. Russian Orthodox theologian Sergei Bulgakov, for example, argues that “in Orthodoxy, faith in the absence of the personal sin of the Mother of God is like incense, like a cloud of prayer which the veneration and piety of the Church concentrate and causes to rise.” Moreover, the mention of “refuge” resonates with the ancient Marian prayer “Sub tuum praesidium“.

We now turn to you and knock at the door of your heart.  We are your beloved children. In every age you make yourself known to us, calling us to conversion. Here we can see a reference to Marian apparitions.

Say to us once more: “Am I not here, I who am your Mother? This is what Mary revealed to the indigenous man, St Juan Diego, in the apparition at Guadalupe.

You know how to untie the tangles of our hearts and the knots of our time. One can read here a reference to “Our Lady, Untier of Knots,” a Marian image to which Pope Francis is famously devoted.

You, “Earth of Heaven,” restore God’s peace to the world. The expression “Earth of Heaven” is taken from a Byzantine-Slavic monastic hymn, and it poetically signifies the union of heaven and earth that we can contemplate in Mary assumed bodily into Heaven.

May the tears you shed for us make this valley, parched by our hatred, blossom anew. Here we can read another allusion to the Salve Regina, where it speaks of the “valley of tears.”

The “Fiat” that arose from your heart opened the doors of history to the Prince of Peace; we trust that, through your heart, peace will dawn once more. We find in these words a veiled allusion to the beginning of the “Treatise on True Devotion” of Saint Louis de Montfort, who explained that, just as God entered the world through Mary, so too now He desires to continue to reign in the world through her.

May you, our “living fountain of hope”, water the dryness of our hearts. This is a quotation from St. Bernard’s prayer, “Virgin Mother, Daughter of your Son,” found in the last canticle (XXXIII) of Dante Alighieri’s Divine Comedy.

You have woven the humanity of Jesus. This is an expression inspired by some of the Eastern fathers (for example, St. Ephrem the Syrian); the image of Mary as a “weaver” is present in Christian iconography from the mosaic of the triumphal arch of St. Mary Major and throughout the first millennium.

The entrustment to Mary also has an evangelical reference. In the Gospel of St John, we read that Jesus, from the Cross, entrusts the only apostle present on Calvary to His Mother: “Woman, behold your son!” And immediately afterward, addressing John, he adds: “Behold your mother!” We find traces of the act of consecration or entrustment to Mary at least as early as the 8th century, with St John Damascene, an Arab theologian of Christian faith and a Doctor of the Church, originally from Damascus. It was he who formulated the first prayer of consecration to Our Lady: “We, too, remain close to you today, O Sovereign Lady. Yes, I repeat, O Sovereign Lady, Mother of God and Virgin. Let us bind our souls to your hope, as a firm and unbreakable anchor, consecrating to you our mind, soul, body, and our whole being, and honoring you, as far as we can, with ‘psalms, hymns and spiritual songs’ (Eph 5:19).”

Thumbnail image – Pope Francis often prays before in icon of “Mary, Health of the People of Rome,” in the Basilica of St. Mary Major in Rome.