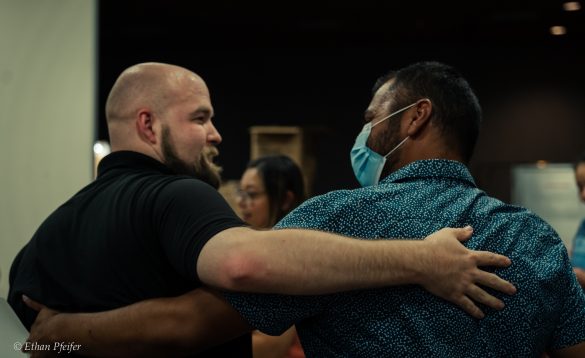 “God willing, after this health crisis, we will think no longer in terms of ‘them’ and ‘those’, but only ‘us’”.

Migrant Ministry is a seminarian led ministry to focus on the migrant community who arrives in Central Washington during the summer seasons. These communities work long and hard hours and oftentimes are unable to go to Mass, so instead, as Bishop Joseph Tyson often says, “If they can’t come to Mass, we go to them.” Mass is held on different sites throughout the diocese and catechesis classes and bible study are offered to those who not only want a deeper understanding of their faith, but also to receive one or any of the sacraments.

This year, the Diocese of Yakima focused primarily on the Yakima site, Fairbridge Hotel and Conference Center. This site held about 1,000 men. Other sites include: Monitor, Wash., which held Mass every Wednesday and saw about 30 to 60 migrants, and Malaga, Wash., which saw about 270 migrants; and although the diocese was not granted permission to be on-site, devotional kits, family activity kits, and staple Mexican goody bags were handed out to the men weekly for two months.

FAIRBRIDGE HOTEL AND CONFERENCE CENTER, YAKIMA – The seminarians’ daily schedule was to wake up at 3:30a.m., meet and greet workers and invite them to morning and afternoon Mass as well as weekly activities at 4:00 a.m. during breakfast with the migrants, and Mass in one of the conference rooms at 5:00a.m. with the supervisor of the ministry, Fr. Jesus Mariscal. In addition, three religious sisters, who are part of the U.S. Sisters Exchange Program, would travel from their parishes to join the men for breakfast and Mass.

The rest of the day, the seminarians and sisters not only prepared the evening activities for the migrants according to the schedule, but also did some teaching themselves: Catechesis offered on Mondays, ESL classes (with an ESL teacher from a local high school) on Tuesdays, Mass on Wednesdays, Adoration on Thursdays, Bible study on Fridays, ESL classes on Saturday, and Mass on Sunday. Each class has seen between 20 to 30 migrants, and about 50 for Mass.

Faith and Beauty with Jill Alexy