Food for the Poor

(Video from the Funeral Mass is below) 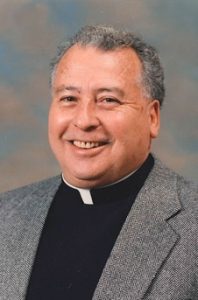 “Food for the Poor.” That was the ministry and the conviction of Father Alberto Cerezo in his final years of ministry. But those of us who knew Father Cerezo would put the accent on that first word: “food.”

I first met Father Cerezo while still a priest in Seattle. He had finished moving the parish church out of the crowded downtown Leavenworth location and moved the parish to a new site with a new name: Our Lady of the Snows. But after his time in Leavenworth he wanted a change. He moved to Seattle. The Diocese of Yakima had loaned him to help us in our Hispanic Ministry. He was serving in Seattle’s north end. Christ the King parish in the Greenwood district of Seattle.

I lost track of Father Cerezo for many years. But when I became bishop of Yakima, I got to know him again. Father Cerezo was still passionate about food. But this time it was a bit different. He became passion with “Food for the Poor.” He spent his retirement years traveling to parishes across the United States promoting the work of this international organization distributing food and medicines to places in need. Somewhat akin to our second reading from the First Letter of Saint Peter, Father Cerezo cared about the flock everywhere. He wanted to feed the flock with his preaching. And he wanted to make sure that no flock was left without food.

At the same time, Father Cerezo also made a point of staying connected to all of us. He came each year to our annual retreat. He genuinely enjoyed connecting with his brother priests here in Yakima. He enjoyed phone conversations he had with so many of us while he was on the road.

The “Beatitudes” from the Gospel of Saint Matthew are often referenced as a summary of the spiritual life. “Makarios” is the original Greek word. It refers to being “blessed”, “happy.” Our Spanish rendering is “dichoso” and refers to the reality that blessings are spoken. I suspect that this was Father Alberto Cerezo’s deepest desire. He wanted to speak well. He wanted others to hear the “blessing.” He wanted others to know that the blessed can be found among the poor, the sorrowful, the meek, the hungry and thirsty, the merciful, the pure of heart, the peacemakers and even the persecuted.

May we give God thanks and praise for the gift of Father Alberto Cerezo, for his many years of priest service, for the way he fed us physically and spiritually, for the way his humanity pointed us to the presence of Christ in our life.

Homily for the Funeral Mass of Father Alberto Cerezo, Priest of the Diocese of Yakima