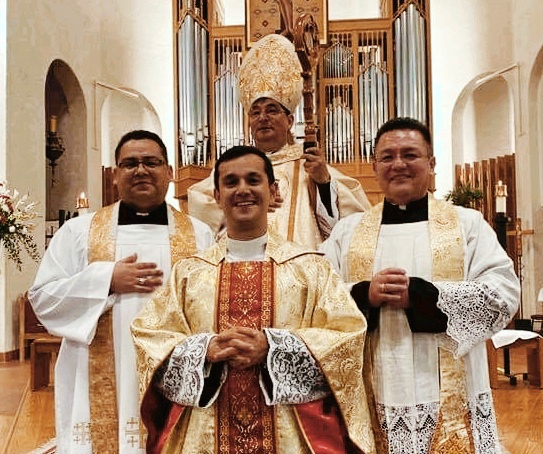 May 29 Update: Thank you for your prayers for Fr. Edgar Quiroga, regarding his petition for R1 (religious worker) status! USCIS will restart its premium processing service in about two weeks and if all goes well, we should receive good news by the first of July. Keep those prayers coming, as we continue to pray for all those facing difficulties due to the coronavirus pandemic.

I am writing to let you know how appreciative I am of the warm welcome you have given our newly-ordained Father Edgar Quiroga Ceballos. His gratitude to you was certainly well expressed by inviting Msgr. Tom Champoux, your pastor, to be the priest who helped him put on his priestly vestments at his ordination Mass last Friday, May 22. Father Tom has mentored many of our newly ordained priests, and that means you must say goodbye to them often as well, as they move to new assignments.

Father Edgar is eager to serve the parish and will be an excellent priest for you.  Unfortunately, I have not yet formally appointed him your parochial vicar, because he has not yet been granted R1 (religious worker) status by the U.S. Citizenship and Immigration Service (USCIS). His F1 student status expired May 20 and until his R1 Status is granted he is not authorized to work, in the way our secular government views it. To do so would run the risk of violating the law, possibly even leading to deportation.

Our nation’s immigration laws are complex, and the COVID-19 pandemic has certainly contributed to these recent difficulties.  Here is the situation: Originally, we were going to be on a pilgrimage to Mexico starting next week, and Deacon Edgar would have applied in Mexico for an R1 Visa (the visa is essentially a “ticket” to enter the country once a given immigration status has been granted). He would have spent some time on vacation, then returned to the United States to spend some time in our summer migrant ministry while preparing for a July 1 starting date at Christ the King. That plan was approved by USCIS after just six days in January, under the immigration service’s Premium Processing method.

Due to the COVID-19 situation we submitted a new R1 petition April 2, so that Deacon Edgar could begin work immediately after ordination without needing to leave the country. Unfortunately, two weeks prior to that, USCIS shut down the ability to Premium Process cases.  When the new status had not been granted by May 11, we enlisted the help of U.S. Representative Dan Newhouse to support our request for Expedited Approval. We learned last Thursday that USCIS had informed the Congressman that the request did not meet the criteria to be expedited and it is now being processed on the standard “slow track” which could be processed at any time, but is likely to take several months.

Father Edgar did celebrate several livestream Masses this past weekend as part of his Ordination, his participation in these Masses being akin to him graduating from school and being a participant in that culminating celebration. The three parishes where he celebrated Mass – including Christ the King – played special roles in his priestly formation. But with the start of a new week, we need to prudently ask him to step back from a leadership role that could be confused, again, with the government’s definition of “work.”  Until the R1 Status is granted, Father Edgar will be ever-present, though concelebrating Masses rather than presiding and preaching. He can hear confessions, though not in a formal, regularly scheduled manner. We will find ways for him to live his priesthood consistent with our immigration laws and his vocation as a priest. But, again, it is complicated.

We did give Father Edgar an end-of-formation transition bonus at the completion of his classes to provide him with sufficient financial support as he transitions into his new role in the coming months. Given his current lack of work authorization, he cannot be paid during this time – even a $10 Mass stipend could be viewed as “work income.” He can receive genuine gifts, provided they are clearly indicated to be gifts. He is not asking for gifts, mind you. But it often is common for clergy and parishioners to offer a small token of their appreciation.  More than anything else, Father Edgar would appreciate your prayers. Just as you have been called to fast from the Eucharist, and to offer it up as a Spiritual Sacrifice, Father Edgar will be fasting for a time from the full practice of his priesthood.

It is a very frustrating situation for all of us, particularly when we so carefully follow our nation’s immigration laws for our clergy and religious who come to us as missionaries. We were clearly caught off guard by the unanticipated changes in USCIS’s practices in the past few months.

Rather than point fingers or lay blame, however, I would prefer that we focus on what Father Edgar can and will do while we wait for the R1 Status change to be granted:

In advance I thank you for your understanding, your prayers and your support of Father Edgar. We all wanted his ordination and first weeks as a priest to be memorable. Perhaps we should have prayed for something a little less so! And yet, as I stated in my homily for his ordination, he chose to be ordained despite all of this. It tells me – and I hope it tells you – that he has the heart and mind of Jesus Christ, who came not to be served, but to serve.

With my every best wish and blessing,