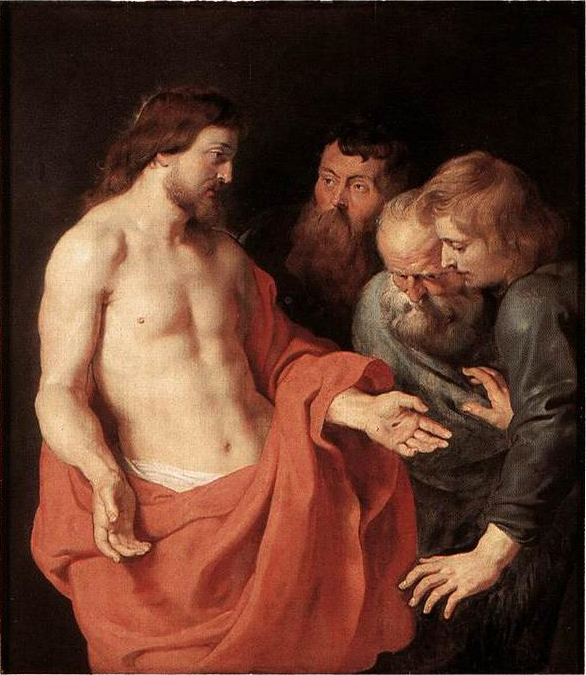 Peace be with you!  You will notice that this very scriptural greeting also comes from the beginning of the Mass – and – it’s a scripture greeting reserved ONLY for the bishop at liturgy?  Why?  The answer goes straight to today’s Gospel from St. John where Jesus – after his crucifixion – bodily arises from the death.  He then comes through locked doors, stands in their midst and says: Peace be with you.

Certainly, the scriptures tell us that these disciples were locked behind closed doors because they feared they would be next for the terrible fate of a similar crucifixion.  But their fear at seeing Jesus was not this.  No. When they realized the vaguely recognizable figure coming through the locked doors was the resurrected Jesus they feared he’d returned from the dead in order to exact revenge for their betrayal.

Let me pause and read between the lines of this Gospel.  Revenge by coming back from the dead would have been a common first century world-view given the many myths among the Greeks, the Romans and even the older myths of Gilgamesh from Mesopotamia.

We have the modern-day equivalents in revenge violence. My first funeral as a bishop was for a young man in Seattle’s south end where I had been pastor. His name was Alofosio Tuifua. He was the son of a Tongan immigrant. He had come through our confirmation program. A fight broke out in south King County. Fueled by alcohol, tempers flared. A fight broke out. Someone had a gun. Alofosio Tuifua lay dead at age 19.

At the vigil, the night before the funeral, youths milled around the church parking lot. They had t-shirts with Alofosio’s image emblazoned on the front side. All were very sad. Some were angry. A few wanted revenge.  At the funeral the next morning I banged my crosier on the church’s terrazzo floor and specifically commanded: “NO REVENGE!”  But it was the father of the boy who at the funeral liturgy got up and spoke the most powerful words. In his broken English and his native Tongan, he told us that he had forgiven the killer of his son.  He commanded us to do the same.  He did not request this. He demanded this. He demanded we do what he did. He demanded that we forgive the killer of his son.

Can you do that? Can you do what that father did? If there’s a pause in your heart – as there is in mine – then that pause will allow you to consider the absolute necessity of receiving Christ’s blessing from this Sunday’s gospel: Peace be with you!

Permit me to hit this story of Alofosio a little closer to home. On Christmas morning it is my custom to celebrate Mass in juvenile detention with young men who are imprisoned for violent crimes. They would be junior high and high school aged men.  They are all just plagiarizing ancient near eastern mythology! They are roleplaying the middle eastern myth of Gilgamesh.

“Peace be with you.”  The Dominican moral theological Father Servais Pinckaers notes that: “One of the astonishing things about peace is that it usually begins at the very point where it seems most unlikely, with our recognition of our sinfulness, which is the cause of our conflicts and evils.”

Indeed, in today’s Gospel, this gift of peace is so astounding that Thomas can scarcely believe it is the Lord himself standing before them offering his great gift of peace.  Yet note the details of St. John’s Gospel.  Jesus tells Thomas: “Put your finger here and see my hands, and bring your hand and put it into my side, and do not be unbelieving but believe!”  Jesus tells Thomas to do this – but note well – Thomas never actually touches the wounds of Jesus.  He sees and he believes:  “My Lord and my God.”

What about us?  We call this “Divine Mercy Sunday” precisely because having traveled through the scriptures of Holy Week up to Easter we might begin to realize that we – like both Peter and Judas – have betrayed Jesus in any number of ways.  Can we face head-on the way we have hurt others?  Can we come to grips that we have done things that have harmed others?  Can we turn down the justifying self-talk that goes on in our heads when we are in the wrong long enough to realize that Jesus in his act of forgiveness has already justified us?  Can we accept his peace? Jesus can pass through the closed doors of our churches today just as surely as he passed through the closed doors in our Gospel from St. John. He can pass through our closed doors with words of peace and comfort for us. “Peace be with you!”

Allow me to close with this point:  If we are searching for Jesus today, the details of tonight’s Gospel gives us a hint about how we will discover him.  Note the details well: The Risen Lord is not immediately recognizable to any of those who first see him.  Yet this resurrected body bears a distinct resemblance to the earthly body of Jesus.  It’s a body that solid but fluid.  Yet it is one that goes through locked doors but also one that eat fish. It’s a body that is visible but not recognizable.

You may recall that the women mistake him for a gardener, the men at the seashore of Galilee think he’s a short-order cook preparing fish for breakfast and the disciples of Emmaus assume he’s just another fellow traveler.

How does Thomas recognize Jesus?  Through his wounds!  The same will be true for me and for you. We will see Jesus today and receive his gift of peace through his wounds that we touch when we live the corporal works of mercy:  to feed the hungry; to give drink to the thirsty; to clothe the naked; to harbor the homeless; to visit the sick; to ransom the captive; to bury the dead.  May we tend his wounds and discover the truth of his words to us!  Peace be with you!