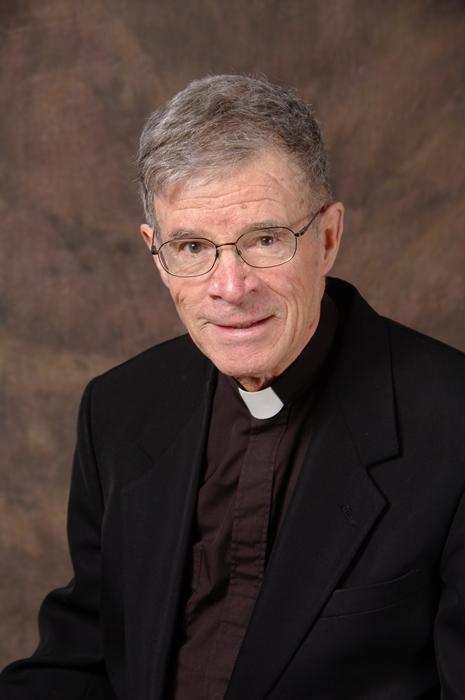 The Rev. Thomas V. Lane, a senior priest of the Diocese of Yakima, died this morning at 3:20 a.m. at the Cottage in the Meadows hospice in Yakima. He was 90. Two of his brother priests, Fr. Darell Mitchell and Fr. Ricardo Villareal, were able to be with him, and he was remembered in prayer by the priests of the Diocese still on retreat. Mass of Christian Burial is planned for Thursday morning, May 17, at Holy Family Parish in Yakima, with a Vigil the evening of May 16. Details will be provided as plans are made.
Born on All Saints Day, November 1, 1927 to Timothy and Helen Lane, who had emigrated from Ireland, Father Tom grew up in the Seattle area. His brother Art, who preceded him in death in 2014, was born three years later. Following high school graduation in 1945, Fr. Tom entered the U.S. Army Air Force and served for 13 months in Japan during the military occupation after World War II. He returned home and enrolled at Seattle University, where he received a BA degree in chemical engineering in 1951. Following graduate studies in the same field at the University of Washington, Fr. Tom worked on the Hanford Nuclear Reservation until 1958. He then enrolled in the St. Philip Neri Seminary for Delayed Vocations in Boston, and later transferred to St. Thomas Seminary in Kenmore to finish his theological studies. He earned a teaching certificate through summer studies at Seattle University. Following graduation, he was ordained at St. Paul Cathedral on May 23,1964.
Father Lane taught higher mathematics at Yakima Central Catholic High School from 1964 to 1968 and served on the faculty at St. Peter the Apostle Seminary in Cowiche from 1965 to 1968. As an associate pastor he served at St. Pius X Parish in Quincy, St. John Parish in Naches, St. Paul Cathedral in Yakima, and Our Lady of Fatima Parish in Moses Lake. As a pastor he served at St. Peter Parish (now St. Juan Diego) in Cowiche, Holy Trinity Parish in Goldendale, and Holy Rosary Parish in Moxee. As a senior priest, he was in residence for many years at Holy Family Parish before moving to Hiilcrest at Summitview Assisted Living in Yakima. As his health difficulties mounted, it was a common experience for Father Lane to encounter health care providers who would thank him for having baptized them, married them, or taught them in school.
Father Lane is survived by his sister-in-law, Eleanor Lane, five nieces and nephews, and many great nieces and nephews. A fuller obituary will be provided at a later date. May he rest in peace.