(Note: Click on the following links to read Bishop Joseph Tyson’s homilies for the Vigil and Funeral Mass) 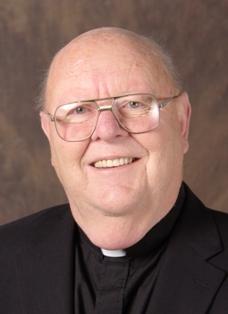 The Very Rev. Thomas S. Kuykendall, pastor of Wenatchee’s St. Joseph Catholic Church since 1998, died Sunday, May 24, due to complications from his recent struggle with cancer. He was 78. Bishop Joseph Tyson of the Catholic Diocese of Yakima and a small group of parishioners were able to celebrate Mass with Fr. Tom in his room at Central Washington Hospital for Pentecost Sunday, the final feast of the Easter season, meant to call to mind again the Resurrection of Jesus Christ, His Ascension into heaven, and the sending of the Holy Spirit on the early church. “A good day to go home,” he had observed. The excellent care he received from hospital staff and parishioners was a great comfort to him in his final days.
Fr. Tom was born September 1, 1936, in Yakima, the only child of Percy and Ursula (Lahiff) Kuykendall. He attended St. Paul Cathedral School from 1942 to 1950, then Marquette High School, graduating in 1954. He then entered the St. Francis Xavier novitiate of the Society of Jesus (Jesuits) in Sheridan, Oregon, moving to the Jesuit Seminary at Mount St. Michael in Spokane in 1958. Two years later he left the Society, graduating from Gonzaga University.
Returning to Yakima, Fr. Tom began a 30-year teaching career: Six years at East Valley High School, and 24 years at Eisenhower High School. He taught Latin, English, debate and journalism, and also served as president of the Yakima Education Association for two years.
After retiring in June of 1991, Fr. Tom resumed his studies for priesthood, including summer work in hospital ministry, service to the homebound, and the study of Spanish. He graduated from the Sacred Heart School of Theology in Hales Corner, Wisconsin three years later, and was ordained to the priesthood on June 24, 1994, by Bishop Francis E. George, OMI. He served as parochial vicar at Christ the King Parish in Richland for three years, then as pastor of Holy Redeemer Parish in Yakima for seven months, until his appointment as pastor of the Wenatchee parish on July 26, 1998.
Fr. Tom was instrumental in bringing the parish together for the building of a new church in 2004, followed by the construction of a parish hall in 2009, both on parish land next to St. Joseph Catholic School. He helped introduce the KC Help program to the parish, working with the Knights of Columbus to provide durable medical equipment to those in need. He also served as chaplain to the Catholic Daughters of America, and was active in working and praying with other pastors and their congregations in the Wenatchee area.
Fr. Tom’s love of teaching was evident in his work, before and after priestly ordination, in the Rite of Christian Initiation of Adults, the church’s program for educating and welcoming new members. His great love of the Church’s liturgy was evident, and one of the reasons he was asked to serve as chief liturgist of the Diocese for many years. He also served as chairman of the Executive Committee of the Council of Priests, helping to advise the Bishop in his governance of the Diocese, for nearly a decade.
Fr. Tom was a spiritual director for many Cursillo retreats for both men and women, and faithfully met regularly with members of a small group of fellow priests in the Jesus Caritas fraternity, based on the spirituality of Blessed Charles de Foucald. He served as Superintendent of Catholic Schools for six years, the past four as Vicar of Catholic Schools as well. On October 11, 2014, the Central Washington Catholic Foundation, at its annual Celebration of Faith dinner, honored him with the St. John Baptist de la Salle Award as a Champion of Catholic Education.
A Vigil service was celebrated at 7 p.m. Thursday, May 28, at St. Joseph Church, 625 S. Elliott Ave. in Wenatchee. A Funeral Mass was celebrated at 10:30 a.m. Friday, May 29, also at St. Joseph. Bishop Tyson presided, with the homily preached by Fr. Richard Keolker, a member of Fr. Tom’s Jesus Caritas group. A luncheon followed in the parish’s Kuykendall Hall. Burial took place at 12:30 p.m. Saturday, May 30 at the Diocese’s Calvary Cemetery in Yakima, 1405 S. 24th Ave. Bishop Emeritus Carlos A. Sevilla, S.J. presided. A Memorial Mass will be celebrated at Fr. Tom’s home parish, St. Paul Cathedral in Yakima, on Saturday, June 6, at 8 a.m.
Fr. Tom was preceded in death by his parents. He is survived by the communities of faith he served, and by 10 second cousins: Jane, Mary, Ann (Fleischman), Margaret and John Wiegenstein; and John, Mark, Greg, Anthony and Philip L’Esperance. Donations may be made in his memory to the St. Joseph Parish Building Fund. As Fr. Tom often said at funeral celebrations, quoting Matthew 25:21: “Well done, good and faithful servant!”

Light of Hope Fund Started for Those...