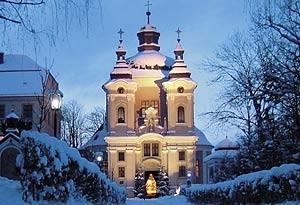 The earliest and most memorable Christmas that I can recall occurred when I was about three or four years old. Santa visited. He seemed to know the precise location on South 14th here in Yakima – at my Grandma’s house – just a few blocks from St. Paul Cathedral. My great aunt – Aunt Eva – lived just around the corner on Maclaren right near the old home of the Yakima Bears – Larsen Field.

I didn’t know it at the time, but my grandma’s youngest brother – my great uncle Balzer – dressed up as Santa. It was a fitting thing to do given his name, for Balzer is the abbreviated German name for Balthazar – one of the three kings who bore gifts for the infant Jesus! However, Uncle Balzer had little physical resemblance to the graciously tall King Balthazar of our nativity set. Quiet the contrary! Uncle Balzer was a big man. He was the fattest man I’d ever met. Sehr groß und ganz fett – as we’d say in German.

Uncle Balzer worked as a butcher here in Yakima and – at one point – ran a couple of butcher shops. But he was part of the German clan – “the ja ja’s” – as we younger ones would later call them – from all the songs they would sing that had the German “ja ja ja ja” as part of the lyrics.

In my earliest years, German was still a primary language spoken by all the older adults. In fact, when discussing Christmas presents for the Christmas tree, my grandma and aunts would often try to disguise their communication by switching into German – which is why I speak excellent German today! But somehow I’d missed the chatter about my Uncle Balzer dressing up as Santa so when he did show up on Christmas Eve I was startled and surprised – even a bit scared. But I loved the fact that he brought me a whole set of Tonka trucks!
Looking back, I can now see how the world of faith and the world of family met under that Christmas tree! Indeed, my grandparents reminded me that the Christmas tree started as a custom from the German-speaking world – long before there was even a unified country called “Germany.”

The custom seems to have developed in the small Austrian town of Steyr where the oldest living Christmas tree is still located. According to local town history, in 1694 the village church in Steyr got a new sacristan. He was afflicted with epilepsy. But coming from the neighboring village of Melk, he brought with him his town’s great devotion to the Christ Child. He created a little chapel in the hollow of a large pine tree and placed in this hollow an image of the Christ child from Melk holding, in one hand a crown of thorns, and in another hand a cross. Praying before the image of the infant Jesus in the hollow of the pine tree, this simple church sacristan found healing and peace.

Because of this sacristan’s devotion, others in the local parish became attracted to this devotion. The devotion grew despite the skepticism of Church authorities in Passau and eventually the villagers engaged with famous Austrian architects to build a Church around the tree with an altar and an tabernacle by the tree, preserving the interior hollow for the sacred image of the Christ Child. Thus Christmas trees became intimately connected with the birth of Christ and this devotion to the Christ Child.

Might we need to re-connect the custom of the Christmas tree with the devotion to the Christ Child today too? Ours is a world that rewards the rich and the powerful, the glamorous and the strong. Ours is a world where the stars we follow are from the world of sports, music and film.

Yet our faith reminds us of the very different way God enters this world: as a small infant and a vulnerable child. As our Emeritus Holy Father Pope Benedict XVI succinctly stated: God comes as a baby. Infants have a natural beauty and a natural attraction. They call us out of ourselves. They elicit a response of love. They compel us to draw them close to us. This is the fundamental stance of God for us. It is the foundation of the spiritual life. God’s closeness is key in the life of prayer. No doubt this is what drew that 17th century Austrian sacristan to venerate the infant Jesus in the hollow of a pine tree.

It is also why our current Holy Father, Pope Francis tends to uplift the beatitude of mercy as fundamental in grasping how close God really is to each and every one of us. One of the stories to emerge from the last papal election, is how Pope Francis – then Cardinal Bergolio, the Archbishop of Buenos Aires – had a room directly across from Cardinal Walter Kaspar, the Archbishop of Cologne, Germany. Cardinal Kaspar had just finished writing his book on the beatitude of mercy and had Spanish translations with him fresh from the publisher. He handed the soon-to-be-elected Holy Father a copy. Pope Francis loved the book so much he invited Cardinal Kaspar to give the introductory talk on the topic of mercy at last February’s planning meeting of the College of Cardinals as they prepared for this coming October’s Synod on the Family which will take place in Rome.

In his book, Cardinal Kaspar points out that one of the key words for mercy in German – perhaps the main word – is Barmherzigkeit. Barm comes from the old Teutonic word meaning “chest” or “breast” and “herz” in German means “heart.” It’s as though the German language itself wants to express the concept of mercy as being drawn into the very breast of God. God’s loving-mercy is so great and so very close it is as though we can feel the beat of his heart – thus Barmherzigkeit.

This is what God wants to do for us. It is the core of the Christmas message. Circling back to the connection between the Christ Child and the Christmas tree, this is why God enters the world as a small child. It is why God invades our world – not with military might – but with – in the original Greek of tonight’s Gospel – a “strata” of angels – literally an army of angels. God comes as an infant to compel us to draw us close to him like a small infant – so close that we can feel his mercy – literally his Barmherzigkeit – through his chest, the very beat of his heart.

But this is not only what God wants to do for us. It is also what He expects us to do for others. God wants us to become his instrument of mercy for those around us. For whom might we become a source of God’s mercy in our family? With whom might we need to become reconciled? Who might need a gesture of heart-felt love from us this Christmas season? From whom have we withdrawn or become distant? For whom – symbolically speaking – do we need to become like Santa Claus as did my Uncle Balzer for me? In short, how can we allow God to be mercifully close to us even as we become mercifully close to others in that original German root meaning of that word mercy – barmherzigkeit?

Friends, my hope and prayer is through our worship, our music and our beautiful environment that you might experience God’s loving mercy for you anew. As you look at the Christmas tree may you see in its hollow the image of the Christ-child. May God bless you all and may you have a very merry Christmas! Peace be with you.

Holy Father to Priests: Mercy in the...