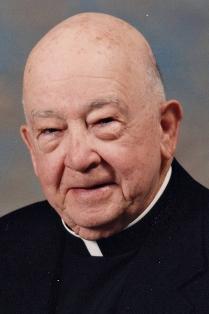 The Reverend Monsignor Desmond Patrick Dillon, 99, a senior priest of the diocese in residence at St. Joseph Parish in Kennewick, died at 1:30 a.m. Friday, May 9 at the Tri-Cities Chaplaincy Hospice House in Kennewick following a brief illness.  Due to the Yakima Diocese Priests Retreat next week, the funeral will be May 19.

Msgr. Dillon was born January 31, 1915 in Hong Kong, the son of Francis Dillon and Petronilla (Lema da Rosa) Dillon.  He attended schools in Victoria, B.C., Hong Kong and Seattle before graduating from O’Dea High School in Seattle in 1933.  He then entered St. Edward Seminary in Kenmore for an eight-year course of studies.

Msgr. Dillon was ordained on May 22, 1941, at St. James Cathedral in Seattle by the Most Rev. Gerald Shaughnessy, S.M.  He served as a parochial vicar at St. Patrick Parish in Tacoma, Holy Family Parish in Auburn, and St. Catherine and St. Theresa Parishes in Seattle.  Special assignments in Seattle included assisting then Fr. C. M. Power (later Bishop of Yakima) at the St. Peter Claver interracial learning center from 1944-1946.  He was named administrator of St. Andrew’s Parish in Ellensburg in 1946.

Msgr. Dillon became a priest of the Diocese of Yakima at its formation in 1951, and remained at St. Andrew’s until 1959.  Special assignments in Ellensburg included work with the Central Washington State College (now University) Newman Club.  He was named pastor of St. John Parish in Naches in 1959, where he served for three years, along with being named director of Catholic Charities of the Diocese of Yakima.  He served in that role until 1968, and was in residence at Holy Rosary Parish in Moxee from 1962 to 1966.  He had a special concern for the establishment of the St. Vincent stores, and helped to resettle Cuban refugees.

Msgr. Dillon was named pastor of St. Joseph Parish in Sunnyside in August of 1979, serving for four years, then was named pastor of St. Aloysius Parish in Toppenish, where he served until 1986.  He then assumed senior priest status and moved back to St. Joseph’s in Kennewick.  In 1991, on the occasion of his 50th anniversary of ordination, he was named a Chaplain to His Holiness by Pope John Paul II, with the title Monsignor.  He continued to assist regularly at Sunday Mass in Kennewick until poor health and advancing age in recent years made it impossible for him to continue.

In retirement, Msgr. Dillon kept up a lively correspondence with the bishops of the diocese, and was a frequent contributor to the “letters to the editor” section of the Tri-City Herald newspaper, writing on topics ranging from abortion, to secularism, to interreligious dialogue, to musings about eternal life.

Msgr. Dillon had an abiding love for the Jesus Caritas Fraternity of Priests, based on the writings of Blessed Charles Eugène de Foucald, a French priest, ascetic and martyr who died in 1916 in Algeria.  As the “regional responsible” in the fraternity for many years, Msgr. Dillon regularly exhorted his brother priests to build fraternity in small groups.  He also was an avid promoter of vocations to the priesthood and religious life.

During Msgr. Dillon’s final illness, a steady stream of parishioners from the Tri Cities came to pray with him at his bedside, a testament to the mutual relationships of love and concern he had developed with clergy and laity alike.  He also was able to finalize his funeral plans and to dictate a final letter to Bishop Joseph Tyson, who was able to pray at Msgr. Dillon’s bedside shortly after his death.

Survivors include cousins and many nieces and nephews.

The vigil service for Msgr. Dillon will be Sunday, May 18 at 7 p.m. at St. Joseph Catholic Church, 520 S. Garfield St. in Kennewick, with a viewing of the body beginning at 5 p.m. The funeral Mass will be Monday, May 19, at 11 a.m. at St. Joseph, with the Most Rev. Joseph J. Tyson, Bishop of Yakima, presiding.  Following cremation, the committal service will take place at a later time at the parish columbarium.

Donations in Msgr. Dillon’s memory may be made to the Diocese of Yakima Priest Retirement and Health Fund, 5301-A Tieton Drive, Yakima, WA  98908.