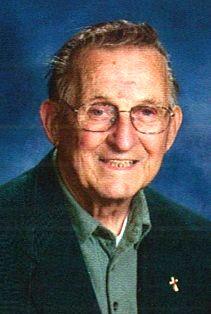 Mass of Christian Burial for the Rev. Mr. Ray Miller, who served as deacon at St. Paul Cathedral in Yakima since his ordination in 1985, will be at 10 a.m. Monday, May 5 at St. Paul’s, with burial to follow at Calvary Cemetery.  Viewing and the Vigil will be at 4 p.m. Sunday, May 4, also at the Cathedral.

Please click on the following link to view his obituary at Brookside Funeral Home.  The text is printed below.

Raymond Joseph Miller, 80, lifetime resident of Yakima, went home to be with his Lord, Tuesday, April 29, 2014 at Swedish Hospital in Seattle.

Ray was born November 25, 1933 in Yakima, WA to Casper and Elizabeth (Buckmeier) Miller. He was raised and educated in Yakima and graduated from Marquette High School in 1951. Ray served in the Korean Conflict in the US Coast Guard. He married Gayle Clark October 15, 1955 in Yakima.

Ray began his working career as a Supervisor for Associated Grocers and the Mead Corporation in the Non Food Department. He was a deacon for 28 years at St. Paul Cathedral.

Ray especially enjoyed the time spent with family. They traveled to Cannon Beach, OR for fifty years vacationing with the entire family, including grandchildren and great-grandchildren as they came along. Ray loved hunting and fishing. He kept an immaculate yard and enjoyed being outside.