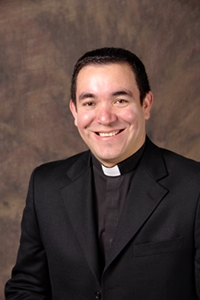 Fr. Felipe Pulido was born in a small town west of Mexico City called Dos Aguas Michoacan.  He is the oldest of seven children.  At the age of 12, he joined the seminary in Uruapan Michoacan, Mexico.  There he studied middle and High School.  He then came to Yakima Valley with his parents, where he has lived ever since.  As a teenager Fr. Felipe worked in the fields picking pears, apples, and cherries and packing fruit.  However, during the fall and winter he went to Naches High School and then to Highland High School in Cowiche Washington where he got his High School diploma.  He worked as a teacher assistant the following three year at Epic Head Start program in Yakima.  At the same time, he was taking care of a sick priest, Fr. Jerry Corrigan.

Fr. Felipe felt a strong desire to become a priest for the Diocese of Yakima and in 1994 he began his priestly formation at Mt. Angel Seminary in Oregon where he graduated with a degree in philosophy in 1998.  His theological studies began in the fall of 1998 in Rome Italy and he graduated in 2002.  He was ordained a priest on June 28, 2002 at St. Paul’s cathedral here in Yakima.  Father Felipe first assignment as a new priest was as an associate pastor at Holy Family Parish in Yakima in 2002.  The following year he was sent to be a parochial Vicar at Our Lady of Fatima in Moses Lake and Queen of All Saint in Warden.  Then he became a full time pastor at Our Lady of the Snows in Leavenworth and St. Francis Xavier in Cashmere.  After two and half years, he was made pastor of Our Lady of Fatima Parish in Moses Lake and Queen of All Saint in Warden Washington.  Around the same time he was name co-director of vocations to the priesthood in our Diocese.  In 2011 he was appointed Director of Vocations in the Diocese of Yakima. In 2020, Fr. Pulido was appointed Pastor for St. Joseph’s Parish in Kennewick, WA.