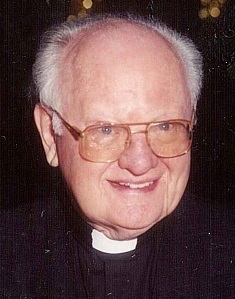 Father Anthony S. Hannick, 89, a senior priest of the Yakima Diocese living in Ireland, died this morning.  He had been in poor health for several months.  Many of his family members were with him when he died.  His body will be received at St. Muredach’s Cathedral, Ballina, County Mayo, at 6:30 p.m. on Sunday, March 10, with the Vigil to follow.  Mass of Christian Burial will be the following day, March 11, at 12:30 p.m., with the Most Rev. John Fleming, Bishop of Killala, presiding.  The homilist will be Father Patrick Fox, a friend of Fr. Tony’s who has kept us posted on his condition.

Please note that after Daylight Savings Time begins Sunday, there will be a seven-hour time difference, so the funeral time in Ireland on Monday will be at 5:30 a.m. here.

Father Hannick was born January 6, 1924, in Ardnaree, Ballina in County Mayo, Ireland, to John and Margaret (Monaghan) Hannick.
He attended high school in Limerick and college in Waterford before entering St. Richard’s Seminary, Kilkenny, in 1954.  Following graduation he was ordained a priest in Kilkenny, on June 8, 1958, for service in the Diocese of Yakima.  He served as parochial vicar of Christ the King Parish in Richland until 1961, then as pastor of St. Francis de Sales Parish in Chelan until 1968, and finally as pastor of Holy Redeemer Parish in Yakima until 1979.  He then served as an intern at the National Institute of Mental Health in 1979-1980, and finally as a chaplain with the Veteran’s administration in Virginia, and California, until his retirement on December 31, 1993.

Other assignments in the Diocese included being moderator of the CYO for the southern deanery, diocesan ecumenical liaison, and moderator for the Council of Catholic Women.

Attached please find a letter from Bishop Joseph Tyson to Father Hannick’s family and friends, to be read at the funeral services.