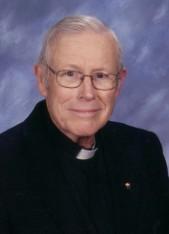 (Note: Saint Joseph Parish in Yakima will offer a Memorial Mass for Father Meany on Saturday, March 9, at 9 a.m.)

Fr. Neill R. Meany, S.J. died March 4, at the Jesuit infirmary in Spokane.  He was a dedicated priest and religious who poured out his life in humble and loving service as a Jesuit priest, teacher, artist, administrator, and friend to many.

The eldest of five siblings, Neill Richard Meany was born in Milbank, SD, on July 27, 1923 to Richard and Corinne (Plouf) Meany.  He graduated from Bellarmine Preparatory School, Tacoma, WA, in 1941 and entered the Jesuit Novitiate at Sheridan, OR, that same summer.  After completing his first set of studies in 1948, Neill returned to Bellarmine Prep to teach for three years.  While there his brother Bill was a student of his.  Neill went to Alma College in California for theology studies in 1951 and was ordained a priest on June 19, 1954, in Spokane.

With studies behind him Fr. Meany taught at Marquette High School in Yakima and Gonzaga Prep in Spokane, held administrative duties at the Jesuit Offices in Portland, and delved into parish life in Yakima, Granger, and Naches.  Ever mindful of the Hispanic people Fr. Meany spent a year in Mexico to learn Spanish to meet their spiritual and pastoral needs.

The forty plus years spent in parish life were some of his happiest; his wit, artistic abilities, and boundless energy helped bring the gospel and the Catholic faith deeper into the lives and hearts of many.  Of note were the stained glass windows he designed for the new St. Joseph Church in Yakima; he also designed the coat of arms for the late bishop of Fairbanks.  Fr. Meany knew of the bishop’s love for flying airplanes and included a propeller in the final design.  Prior to his final months of life Fr. Meany would continue to draw cartoons for the staff and include his old hearing aid batteries as part of them.

Fr. Meany was preceded in death by two sisters: Catherine Bichsel, and Joan Sullivan.  He is survived by his sister Rosalie Leba of Minneapolis, MN, and his brother Bill of Kirkland, WA.  There are numerous nieces and nephews, cousins and countless friends as well as his brother Jesuits of the Oregon Province.

A vigil service will be held at 7:30pm, Friday, March 8, at the Jesuit House Chapel on the Gonzaga University campus.  The funeral Mass will be 2:00 pm, Saturday, March 9, at St. Aloysius Church.  Burial will follow at the Oregon Province Cemetery.  Contributions in honor of Fr. Meany may be sent to The Senior Fund, c/o The Oregon Province Society of Jesus (P.O. Box 86010, Portland, OR  97286) and/or to Hospice of Spokane (P.O. Box 2215, Spokane, WA  99210).  Arrangements have been entrusted to Ball and Dodd Funeral Home, 5100 W. Wellesley, Spokane, WA.