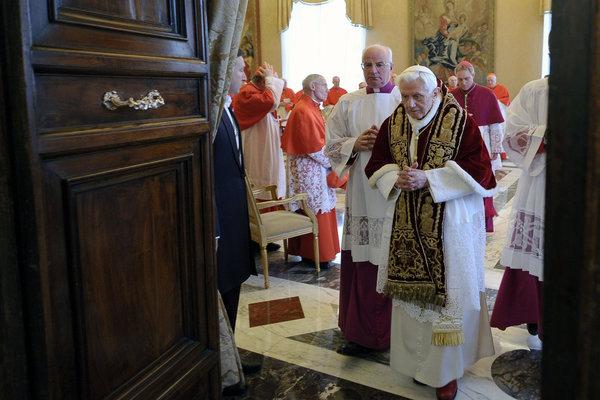 Dear Friends:
We are all awaking to the news this morning about the recent decision of our Holy Father, Pope Benedict XVI, to resign due to advanced age.  While I received this news with some sadness, I also greatly appreciated the Holy Father’s carefully discerned decision.
As I told listeners on KIT Radio here in Yakima this morning, I felt a personal connection with the Holy Father.  I was among the very first to be named a bishop just days after his election as Pope in 2005.  Of course, it was also our Holy Father who asked me to leave as auxiliary bishop in Seattle and become the seventh bishop of Yakima just under two years ago.  I had the chance to see him with my brother bishops almost a year ago in April when the bishops from the Pacific Northwest had their “ad limina” visit – “ad limina” meaning in Latin, “to the threshold” (of the apostles).  Those visits generally happen on a five-year cycle and are times when we personally meet the Holy Father, reviewing with him the graces and challenges in our local dioceses.  I was struck by the manner in which he so intently listened.
Similarly I was honored to concelebrate the Mass of canonization for Saint Kateri Tekakwitha – the first Native American woman uplifted by the Church as a saint for us all.   This extraordinary event in Rome brought believers from all around the world.  St. Kateri along with the six other saints were branded as “Saints for the New Evangelization.”  In different ways, each of the saints faced particular challenges in uplifting the Gospel of Jesus Christ.  Certainly the sad and shameful history of the treatment of Native Americans and First Nation peoples made St. Kateri Tekekawitha’s faith all the more stellar and remarkable, for her witness helps elevate our understanding of the dignity of the human person and the way in which God works through all languages and all cultures across all time.  This universality points to the salvific power of Jesus Christ.
Pope Benedict XVI has an amazing ability to teach these basic human truths in the context of a era in which this human dignity continues to be marred by degradation of our humanity through the millions of children aborted and the manner in which we treat our dying.  During his life, Pope Benedict witnessed the bloodiest and deadliest wars in human history.  Seven million Jews died at the hands of Nazi hatred.  Nearly 80 million died in the course of the Second World War.  In many ways from the guns of 1914 to the fall of the Berlin Wall in 1989 we were in the middle of a 75-year assault on the dignity of the human person and the distortion of human freedom as one of radical individual choice. In many ways those challenges continue today.
I am quite certain that the next Holy Father will continue teaching a robust and deep freedom that comes only from gazing  upon the human face of God in the person of Jesus Christ.  This freedom is not a negative freedom from constraints.  Rather, the freedom proclaimed by Christ and taught by the Church is a freedom that literally frees us to become the very best persons that God calls us to be.
I consider it providential that Pope Benedict XVI chose to make this announcement as we prepare to enter Lent.  For Lent is ultimately a time of deepening our freedom, turning away from the enslavement of sin and the false allurements that too often hold us hostage to the powers and principalities of our world.  Prayer, fasting and alms-giving – the three Lenten disciplines – are actually the spiritual tools of human freedom. They give us the moral stamina to embrace the unique freedom witnessed by Jesus Christ and taught by the Church.
This Lent will prove to be an extraordinary time of spiritual renewal, preparing our hearts for a renewal of our faith in this “Year of Faith” and preparing our Church for a renewal of its leadership through the election of a new Holy Father.  This is why I am asking that during the Sunday Masses in Lent, we include a special intention for our current Holy Father as well as for that person who will be elected the next Pope too.
I will be sharing a few more of my reflections in Spanish tomorrow morning during the 8:00 a.m. news on Radio KDNA 91.9, “La Voz de Campesino.” And feel free to keep checking Facebook and the web page for further updates as well.
Blessings!
Most Reverend Joseph J. Tyson
Bishop of Yakima
Email