Reflecting the Peace of Christ to Our World - Archived

“Glory to God in 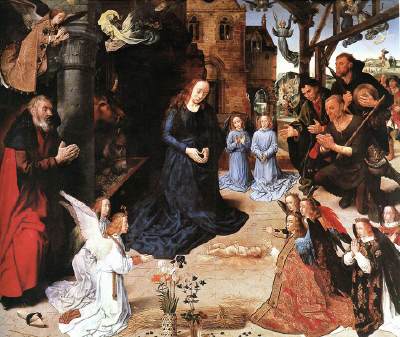 the highest and on earth peace to those on whom his favor rests!”  Those words of the angels form the high point – the crescendo if you will – of the Church’s selection of St. Luke’s Gospel for this night’s Mass.

Yet the fifteen century painter Hugo Van der Goes paints a different picture of those angels.  In his famous work, “The Adoration of the Shepherds,” Van der Goes indeed does have a number of angels around the shepherds.  But there is one angel off to the right, hovering a bit in the distance, visible through a window in the stable.

It’s as though Van der Goes wants the viewer to see this angel a bit differently highlighted – not by the light of Christ – but by the source of that Divine light – the Eternal dawn breaking out in the distance.

Bringing “Peace on Earth,” I’d like to suggest, happens with a similar human artistry.  Human acts of peacemaking stand out precisely because they are silhouetted by the divine light of daybreak.

Perhaps it was Nobel Peace Prize winner Mother Teresa of Calcutta who said it best when she reminded her own admirers that real peace on earth does not come from doing great things, but rather doing little things with great love.

What do these great things of love that bring peace upon our earth look like?  I recall the story of Jean Banzubaze, an ordinary Hutu Christians who, when he spotted a young Tutsi neighbor, pulled him into the safety of the bushes, sparing him from certain death, and took him into his own home.  “If anyone sees us and asks who are,” he ordered him gently, “tell him that you are a Hutu and that you are my son.”

Who are those peacemakers doing small things with great love?  They’re people like Nirmal Mendis, an Anglican priest from Nugeland inSri Lanka.  That island-nation’s Tamil and Singhalese farmers had labored and lived for years side by side until the Sri Lankan army began battling Tamil Tiger guerrillas in their rice fields.  The Reverend Mendis brought both Tamil and Singhalese farmers back together to work the rice fields again under banners that proclaimed, “Peace to the Rice Fields.”

Where do peacemakers share their love?  Well, one place would be Sandy Hook Elementary, where school principal Dawn Hochsprung instinctually ran toward that gun danger she heard in the next classroom that December morning two weeks ago rather than away from it.  That small act of love to restore peace in her school building cost her life.

In all the above examples such acts of love far transcend regular human goodness.  Taken together such seemingly random and sacrificial acts reflect a kind of light – a kind of distant light marking for us a possible path in our times of darkness.

This “peace” – this “peace on earth” – so evident from such small human acts of great love – is not an act we manufacture on our own.  True peacemaking comes from a fundamental life-orientation – like that of the angel in that famous Van der Goes painting – a fundamental orientation toward that greater reflected light accessible to believers and non-believers alike – or to paraphrase the Gospel – people of “good will.”

It’s a light we follow from the Prince of Peace.  It’s the in-breaking of God’s very word-made-flesh in the flesh at Bethlehem, a name that means the “place of the bread.”  Most especially for Catholics this altar, this “Bethlehem,” this place of the bread is where God comes to feed us so we can become more the person God made us to be.

So whether you come often or very seldom to St. Paul Cathedral, as bishop I am grateful that you are here at our home listening deeply to the Christmas message of love.  My hope and prayer is that each and every one of you may find your place around the crèche and – like the famous angel of Van Goes’ painting – reflect this profound light of a God’s very birth upon all whose lives you touch.  May our voices join with those of the angels this night: “Glory to God in the highest and on earth peace to those on whom his favor rests!”  Peace be with you!